It’s hilarious how pro-Zimmerman people—and I am sad to admit that they are almost invariably on the right—are acting as though the case for Zimmerman being a racist rests solely on whether or not he uttered the word “coons.”

This is complete nonsense birthed from an unwillingness to look at the totality of the facts.

The cumulative case for Zimmerman’s racism is so strong that one could easily concede the “coons” point and still have a credible case to accuse Zimmerman of racism. Here are four main points:

1) Aside from the fact that Zimmerman called the police many times on “suspicious-looking” black males, Zimmerman called the cops on a 7-9 year old, four-foot tall black child who looked “suspicious” while walking to an elementary school. I’ve yet to see one of Zimmerman’s prominent defenders in the conservative media address this point. Why would a black child walking to an elementary school look suspicious? And even if one takes the absurd position that Zimmerman was concerned for the child’s safety, why would that necessitate a phone call to the police, as opposed to watching and making sure the child got into the school where he would have been safe?

2) Zimmerman profiled Trayvon Martin and started listing crazy stereotypes all because Trayvon was wearing a hoodie while it was dark and raining. “He looks like he’s on drugs.” “Something is wrong with him.” “He looks like he has something in his waistband.” “They always get away.” While “colorblind” people can pretend that Zimmerman would have treated a similarly dressed white person the same way, it is obvious that he profiled Trayvon. Listen to more of Zimmerman in action with another black male “criminal”:

3) Zimmerman started a new website in which he proudly displayed an image of a black cultural center defaced by graffiti that read: “Long Live Zimmerman.” 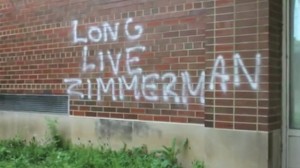 Why would any non-racist person endorse people defacing black cultural centers with graffiti—even if the graffiti was flattering to that person? There is no plausible way that Zimmerman couldn’t have known that the image was of a black cultural center, since the picture floated around the Internet was attached to news stories that explained how racists have been defacing black centers with graffiti. Evidently, Zimmerman sees this as a badge of victory.

This fits in nicely with Zimmerman’s father’s comments about how much hate has been coming from blacks and the president – essentially reciting the right-wing talking points that have been repeated during this case. (However, Judge Zimmerman expects that we’re all supposed to forget about the hate that came from his son who actually chased down and killed an unarmed teen.)

4) Lastly, we know that Zimmerman’s MySpace name was “datniggytb.”

Oh, and we can’t forget, as Hannity always reminds us, Saint Zimmerman mentored black kids, so he is congenitally incapable of having hate towards blacks!

In essence, it is preposterous to pretend as though all that needs to be proven is that Zimmerman didn’t say the word “coons” for the charge of racism to magically disappear.

Zimmerman’s fans can have the word “coons,” and I’ll still have a credible case for calling Zimmerman a racist. In any event, because I am a conservative, I am against hate crime legislation. I think they are superfluous in cases where there is racial hatred or hatred based on sexuality. Anyone who commits a brutal unprovoked assault or murder is guilty of a hate crime—and the law recognizes that even without hate crime legislation. (I am currently researching this topic for a term paper in my victimology grad class.)

Zimmerman should be imprisoned for life for killing an unarmed minor. While I resent that conservatives are pretending that Trayvon’s race has nothing to do with this case—except, of course, when they are joyfully thug-ifying the dead black victim and smearing blacks in the process—I believe Trayvon’s race in this case is culturally important, even if legally immaterial.

Zimmerman’s racism doesn’t keep me up at night. I don’t go about my life terrified of experiencing racism, nor do I believe that I am powerless to achieve in America because of the racism of a few. However, it’s sad that some conservatives are furiously arguing against the charge of racism that Zimmerman faces because they need their absurd colorblind worldview, where all 21st century racism is a figment of the imaginations of blacks, to remain intact.

It would have been beautiful if conservatives acted like principled adults during this case. The right could have kept the moral high ground while civilly answering leftists who absurdly argued that Rush Limbaugh was responsible for the death of Trayvon. Also, the right could have had the legitimate authority to take NBC to task for doctoring the Zimmerman tape. However, the right has no moral standing to accuse the left of any malpractice in this case after taking fake pictures off neo-Nazi websites to thug-ify the dead kid, engaging in shocking racism by falsely arguing that the mainstream media lightened Trayvon’s picture to make him look more “innocent,” and writing pseudo-intellectual, racist pieces telling whites to avoid blacks. The right, by and large, has been heinous in their coverage of this case.

Now Zimmerman has been arrested and charged with 2nd degree murder, which no prosecutor worth their salt would go for without absolutely devastating evidence to defend their position, I am content with letting the American judicial system handle this case.