As an avid moviegoer—and a huge fan of comics turned into movies—I woke up on Friday morning with every intention of going to see the early-bird screening of The Dark Knight Rises.

(FYI: Early-bird screenings are not only considerably cheaper at Century Theaters—yep, I’m an impecunious graduate student and a serious fiscal conservative—but there are also less annoying people in theaters during these screenings. It’s an all-round more enjoyable movie experience! Try it!)

When I turned on my TV, however, I learned about the Colorado shooting that had occurred a few hours earlier. Needless to say, I was shocked and completely appalled. I decided against going to see the movie—although I will go and see it next weekend.

A crazed gunman, James Holmes, 24, walked into a packed theater during a midnight screening of The Dark Knight Rises and began to open fire, killing 12 people and injuring over 50 others.

Watch for details on the shooting

Literally hours after the incident, well before the facts of the case were even clear, ABC’s Brian Ross brazenly took to the airwaves to declare that James Holmes is a member of the Tea Party. The information was factually incorrect. Leaving aside the journalistic embarrassment of getting a critical fact like that wrong, what is more problematic is that some people think it is morally acceptable to instantly start looking to blame anything and anyone other than the murderer upon hearing about such a grisly massacre.

The initial impulse of non-sociopathic people upon hearing of a tragedy like this is to express sympathy to the victims and their families. It should not be, “Aha! This is an election year! Let me see how I can smear the right and do my part to make sure Obama gets reelected!” The “never let a good crisis go to waste” Democrats cannot restrain themselves from enthusiastically using the freshly spilled blood of innocent victims for the advancement of their ideological goals.

Obama’s speech about Trayvon and his speech about this Colorado shooting were similar. Whenever speaking on any tragedy involving young people, Obama always invokes his children. In his Trayvon speech, Obama powerfully and effectively said that if he had a son, he’d look like Trayvon. With the Colorado shooting, Obama said that his daughters go to the movies regularly. Obama’s “that could have been my child” line is his way of showing empathy with victims of murders. It’s a shame that it’s not acceptable for him to use the line after the shooting death of a black teen, but it’s just fine if he uses it to express empathy over the death of victims that happen to be mostly white. (Yes, race is the elephant in the room!) I have no time or patience for such arrant phoniness and sheer hypocrisy.

OMG! James Holmes Is So Brilliant and Smart!

Perhaps the most irritating part of the coverage of this case is the news media going nuts about how brilliant and intelligent Mr. Holmes is. Granted, Mr. Holmes was a Ph.D. student studying neurosciences, but why must the media consistently portray him as some kind of Einstein-esque genius? He is a cold-blooded murderer, regardless of his educational attainment.

This picture has been going around on the Internet, and there is a lot of truth to it: 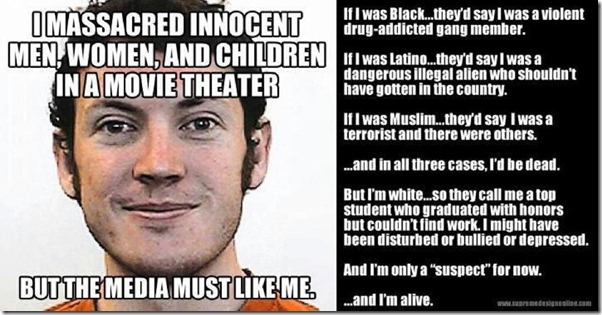 Manifestly, if James Holmes were Jamal Holmes, with exactly the same credentials, his academic achievements would be scrubbed, and he would be shoehorned into the “thug” role faster than you can say “gangsta rap.” In any case, the fulsome celebration of a murderer and bending over backwards to portray him as a very brilliant person who was merely troubled is just disgusting. He is a vile, soulless person who should be anathematized—not lionized—by the media.