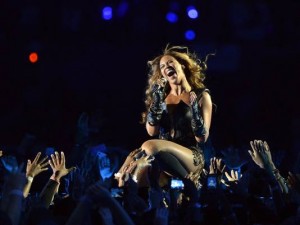 Before I begin, I must preface this piece by letting it be known that I am a huge Beyoncé fan, and I have followed her career from the very beginning. And, no, I am not talking about since Crazy In Love in the early 2000s. I am talking about since Destiny’s Child came out with their first hit single—No, No, No—when I was in primary school in the late 1990s. Although there are many singers that I admire, Beyoncé is easily my favorite singer of all time. I have never read a negative review of her artistry and/or vocal ability authored by someone who has the faintest clue about music. Those who have negative things to say about Beyoncé’s singing/performance abilities are the kind of dense musical illiterates who think singing over a pre-recorded track with a provably live microphone constitutes lip-syncing. Real artists who understand music have nothing but glowing praise for Beyoncé—and that’s not just limited to contemporary pop artists (or black artists of the R&B persuasion). Classically trained singers and certifiable music legends of various musical styles routinely praise Beyoncé. The list includes operatic legend Plácido Domingo, Barbra Streisand, Patti LaBelle, Stevie Wonder, Tina Turner, and many, many more.

Beyoncé performed at the Super Bowl halftime show and gave a performance that is objectively the best halftime performance in the history of the event. Major news outlets, the same ones that were trashing her after jumping on the ridiculous “lip-sync” bandwagon, unanimously praised her for her outstanding performance. Some of the glowing praise she received:

Live, she was dead-on.

The force of nature that is Beyonce answered any and all questions about her commitment to authenticity with a dynamic Super Bowl XLVII halftime performance that apparently sucked all of the power out of the the Mercedes-Benz Superdome in New Orleans.

From The New York Times:

[F]or 12 or so minutes at the center of the Superdome field on Sunday night, she balanced explosions and humanity, imperiousness with warmth, an arena-ready sense of scale with a microscopic approach to the details of her vocals. Amid all the loudness were small things to indicate Beyoncé was answering her skeptics, quietly but effectively.

She took center stage in New Orleans to shut everybody up. She did — at least those who doubted her skills as a live singer and a performer. . .The artist who dubbed herself Sasha Fierce made many musical arguments. None involved submitting to doubters.

However, as was expected, some on the right jumped in to irrationally attack her. In a shockingly silly piece on National Review Online, Kathryn Jean Lopez essentially argues that because Beyoncé did not wear a long, flowing evening gown to perform a dance-heavy halftime performance, society is on the verge of collapse. (Or something to that effect.) Does Ms. Lopez also believe that cheerleaders should wear dresses when performing their routines? Does she believe that gymnasts need to be tumbling in evening gowns? (Or maybe just Beyoncé performing dance routines in a burkha will make her happy!) Her argument is transparently nonsensical, and it is obviously birthed from childish bitterness at the fact that Beyoncé supported and voted for President Obama.

I don’t support Obama’s policies, and I certainly didn’t vote for him, but perhaps the Christian in me finds it difficult to detest the man so intensely that I hate everything connected to him, including having that detestation flow to celebrities who dare to support him. Obviously, critics of Beyoncé would have much preferred seeing a sexual libertine like Ted Nugent perform, so he could scream about sticking a machine gun in Obama’s mouth. That’s what these cretins call “entertainment” from a “conservative” hero, but we’re supposed to believe that Beyoncé is a harbinger of the end of moral America?

The sustained effort by ignoramuses to present Beyoncé as some sort of morally promiscuous and reprehensible person is wholly preposterous to anyone with even a fleeting familiarity with the basic facts about her life. Not only is Beyoncé one of the most talented vocalists to ever grace the planet, but her impeccably clean personal life reflects a lot of conservative values. She lives by conservative values more than many of the people criticizing her, and definitely more than the complete crooks that are elevated as conservative icons. Maybe if she were as immoral as Newt Gingrich and Ted Nugent in her personal life, then she’d be a hero to these hypocritical right-wing frauds.

Unlike many of the trashy, scandal-ridden performers that today’s music industry is replete with, Beyoncé is not known for scandals. This is why people jumped on the lip-syncing story so aggressively. It was their Aha! She’s not perfect! moment. Beyoncé doesn’t take drugs. She isn’t constantly in the news for sleeping with different men. In addition to being known for her machine-like work ethic, she is famous for being one of the few female celebrities to only be linked with one man (in her case, Jay-Z) for a full public career. Beyoncé then married that one man, and they had a daughter together—inside wedlock. In order to trash her, Beyoncé’s critics ignore her entirely clean personal life and flimsily indict her for the “felony” of showing some skin when she performs. To present Beyoncé as the leader of moral decay in society just shows how desperate right-wingers can be in their attempt to trash anyone they perceive as being “on the other side.”

When right-wingers feel as if it is their mission to trash everyone and everything in society that doesn’t aggressively spout right-wing platitudes, they look like crazy people. Any person who takes a sober look at Beyoncé’s personal life knows that she reflects the ideals of conservatism significantly better than most of the hypocrites who volubly profess conservatism, despite its conspicuous absence in their immorality-filled personal lives. The crazies who shoot from the hip with their criticisms of everything in pop culture inevitably make common sense conservative ideas look loony by association. If conservative ideas are going to start winning, hypocrisy and irrational criticism cannot become hallmarks of conservative commentary.