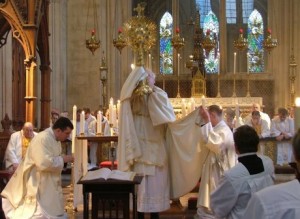 Notice how the title of the discussion below isn’t Catholic Church in Crisis. It’s titled Church in Crisis. Lamentably, the perpetual scandals in the Catholic Church are going to be used by atheists to indict the entire Christian faith. Atheists will deliberately disregard the acute theological differences between Catholicism and Protestantism in order to attack Christianity as a whole. The church is not in crisis; the Catholic Church is in crisis. There’s a colossal difference between the two statements. Call me a nitpicker, but these militantly anti-religious people know exactly what they are doing—and they’re very slick.

In the future, I am going to write about the challenge that Christianity faces as a result of the scandals that are rife in Roman Catholicism. Although I believe that Catholics, unlike Mormons, are Christians—because they do believe in the bare minimum required to be Christians—I disagree with almost all of the doctrines of Catholicism that go beyond the basics of Christianity.

As I said previously, I will also be writing about the racist, anti-Semitic, paleoCON, neo-Nazi, white supremacist swine that hide under the banner of conservatism in order to promote their Nazi ideology, and how allowing this to continue by pretending it doesn’t exist poses a gigantic threat to the political and intellectual viability of authentic conservatism.

Unfortunately, I won’t be posting anything on this site in March—and probably the first half of April. I’ll be busy writing and editing my thesis. You can still catch me on Twitter, though, where I will be posting. (Tweets are less tasking to produce, and they’re much less distracting than writing blogs.)

I’ll be bringing the heat when I return—GUARANTEED! Quality content is coming soon! Stay tuned!