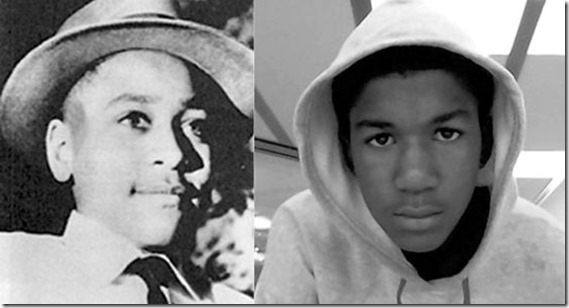 As the outrageous ‘not guilty’ verdict in the murder trial of George Zimmerman came in, Trayvon Martin was instantaneously elevated to a symbol of greater historical import than Emmett Till. However, many still believe that the comparison between Trayvon Martin and Emmett Till has more basis in melodramatic exaggeration than in logical argumentation. Those who think this way are disinclined to look at the bigger picture.

The idea that Trayvon Martin and Emmett Till are incongruous is based solely on myopically looking at the brutality of their respective deaths. Yes, Emmett Till’s body was unquestionably maimed more severely by Roy Bryant and J. W. Milam than Trayvon Martin was at the hands of George Zimmerman. Nobody can dispute that historical fact.

However, the historical context in which the death of Emmett Till occurred was a time when Jim Crow was an integral part of American livelihood and overt racism was both pervasive and uncontroversial. By contrast, the shooting death of Trayvon Martin occurred in modern America with a black man occupying the Oval Office—and, more importantly, at a time when overzealous academicians and naïve social commentators consistently advance the phantasmagoric delusion of a colorblind, post-racial America.

Manifestly, the shooting death of Trayvon Martin and the utterly depraved support for his killer by a vast majority of people on the American right shows that despite the progress that has been made on race relations on an official level, there is still a casual cultural acceptance of anachronistic bigotry that permeates America. It is this culture that makes the killings of innocent black males like Trayvon Martin acceptable. Does that mean every American is racist? Absolutely not. However, the insidious folklore that suggests racism has completely evaporated is the very notion that allows atrocities like the shooting death of Trayvon Martin to occur. Lamentably, the proverbial young black male is the receptacle in which the most vituperatively racist notions about blacks are contained—and those racist notions preclude him from being an authentic victim. Trayvon Martin happens to be the current apotheosis of the proverbial young black male.

While Emmett Till was savagely murdered, he did unintentionally provoke the murderous tendencies of his killers by being a 14-year-old black boy who committed the “crime” of whistling at a married white lady. Presumably, if one were to transport the immoral right-wing commentators of today back to 1955, they would have argued that Till was a threat to society, and that he was a feral rapist who would have terrorized the neighborhood. They would have also argued that Till’s killers did the world a favor, just like Zimmerman supposedly did by disposing of “trash” Trayvon Martin.

Those who viciously attack Trayvon Martin but see Emmett Till as a civil rights icon do so solely because they have the benefit of the historical record to aid their morality. Their reaction to Trayvon, however, exposes how flawed their moral compasses truly are when there are no history books to give them the correct answers. It shows how quick they are to demonize the black murdered victims and paint them as the aggressors responsible for their own deaths. In Trayvon’s case, they even managed to successfully twist facts to achieve this, such as ignoring Zimmerman’s role as the instigator and only focusing on Trayvon’s actions to defend himself from his armed killer.

Interestingly, if one looks at various right-wing comment sections on the Internet, one can see people debating whether or not Emmett Till caused his own death in similar, but less vitriolic, ways to the heartless pontifications about Trayvon causing his own murder. Even with the benefit of hindsight, some of these wicked folks cannot contain themselves from revising the “liberal” narrative on Emmett Till.

It is worth posting this comment with a short, revisionist account of what this right-winger feels “really happened” to Emmett Till:

Someone else that has bothered to research the case rather than just swallow the liberal take all these years.

Till was much larger than his age and was trying to show off to his country bumpkin cousins.

He went back into the store and asked the wife to be his ‘girlfriend’. I doubt if he used those words.

The wife didn’t wish to cause the young man any trouble and kept her mouth shut. In fact, it was an old black man sitting outside the store who was insulted and tattled to the husband when he got back from a trip.

It became a tragic case of a couple of drunk guys squared off with an obstinate kid and nobody backed down.

This nonsense is eerily similar to the justifications made across the conservative media for the needless killing of Trayvon Martin.

Clearly, if one has the immoral temerity to justify the shooting death of Trayvon Martin, then Emmett Till’s murder can also be justified using the same malefic logic. Objectively, Trayvon Martin did less to initiate his murder than Emmett Till did.

Trayvon did precisely nothing to make himself a target of his killer’s attention except being a black male wearing a hoodie and peacefully walking home after buying Skittles and Arizona juice on a dark rainy night. The lack of sympathy with which Trayvon was treated for literally doing nothing wrong except walking home, and then being forced to defend himself against an armed killer with a history of felonies, shows the extent to which many are desensitized to the plight of young black males.

One of the key counterarguments used to contest the point that Trayvon Martin and Emmett Till cases are relatable is that Emmett Till was lynched, whereas Trayvon was “only” shot. They argue that lynching has a special level of brutality in American history and should not be frivolously compared to other cases.

Interestingly, however, this argument often comes from the same people who, with shocking alacrity, accuse mainstream media sources of engaging in high-tech lynching in order to distract from the marital problems of famous black Republicans, such as Herman Cain. To them, lynching deaths have a special place in America and should not be flippantly compared to other murder cases—but lynching deaths can apparently be compared to politically unfavorable news stories. The hypocrisy is rich.

When the history books are written about the tenure of Barack Obama as President of the United States of America, Trayvon Martin must unfailingly be placed adjacent to that story. While America has advanced legally, and it is no longer impossible for blacks to make it to the zenith of government in America, the shooting death of Trayvon Martin and the despicable reaction to it balances that narrative. It shows that, in many ways, America still has a very long way to go on race.

Certainly, Emmett Till did not deserve to die, but right-wing commentators dedicated to convincing people that innocent Trayvon Martin caused his own death could argue the exact same thing about Emmett Till, using all his teenage misbehaviors as rationales for his death. Surely, the whistling act that provoked Till’s murder gives them a sturdier foundation to build that sophistical case than they had with the death of Trayvon. Trayvon didn’t whistle at anybody to provoke fear in them. The only things that provoked Zimmerman was Trayvon’s blackness and his hoodie—a perfectly understandable item of clothing to wear in the rain.

Emmett Till is one of many examples of savage, racist murders occurring in the savage, racist era of Jim Crow. A savagely racist murder in a savagely racist era is still morally opp­­robrious, but it is less historically surprising. By contrast, the unnecessary killing of Trayvon Martin, the gleefully racist reaction to his death, and the joyous celebrations of the acquittal of his killer, is the prime example of racist murder in the allegedly “post-racial” and “colorblind” 21st century era of Obama. For that manifest reason, Trayvon Martin historically supersedes Emmett Till.