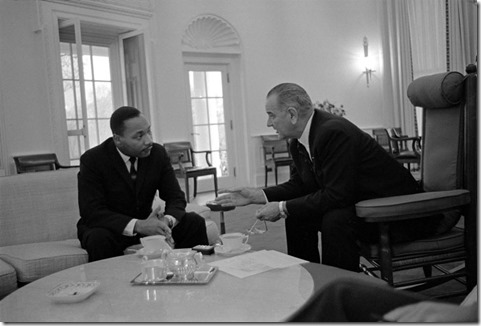 “The first thing a man will do for his ideals is lie.”—Joseph A. Schumpeter

Earlier today, President Obama gave a speech at the Lyndon B. Johnson Presidential Library in Austin, TX in order to mark 50 years after the Civil Rights Act of 1964. Naturally, both conservative Republicans and liberal Democrats have chosen to proclaim themselves as heroes on civil rights, while casting the opposing side as villains. The truth, as expected, is somewhere in the middle.

Simply pointing out that Republican politicians supported civil rights bills in the 1960s is not a refutation of the fact that many ideological thought leaders in the mainstream conservative movement did not.

Similarly, Democrats pretending as though Lyndon Baines Johnson was an anti-racist hero because he signed the Civil Rights Act of 1964 into law are delusional partisans.

The only reason why LBJ supported the Civil Rights Act of 1964 was because it was politically expedient for him to do so, inasmuch as the moral and political capital the movement had cultivated simply had too much potency to even attempt to enforce a countermeasure against. Lying partisan Democrats today conveniently fail to note that LBJ had a long history of opposing all civil rights legislation before it became politically suicidal to do so. An honest look at LBJ’s record shows the utter preposterousness of praising him for supporting civil rights legislation as president. An honest look at his record shows that it was something he had to do in furtherance of his own selfish political ambition.

President Obama should have given his speech today at a neutral location—not at the Lyndon B. Johnson Presidential Library. LBJ was not a champion of civil rights. He was a racist opportunist who opportunistically shifted with the political winds in order to secure his own legacy and presidential future. Mendaciously heaping mountains of moral credit on Lyndon Baines Johnson and deeming him a civil rights champion is a brazen affront to real civil rights heroes who took brutal beatings and bullets while fighting for the civil rights of black Americans. The real civil rights heroes are those who fought for it both when it was politically and socially popular and when it was politically and socially unpopular.

To pretend as though racism resides in only one political party is not only ahistorical, but it fundamentally trivializes the important fight against this invidious social plague. Racism has no political home. The fact that there are still a number of people, across the political spectrum, who cannot be honest about the history of racism in the United States explains why we still have racism in society today. You cannot solve a problem without being honest about its roots. While the truth about racism is often inconvenient for partisans who love rewriting history to suit their ideological goals, it is important for honest people to continue to tell the truth. It is an inarguable fact of American history that both the American left and the American right have less than stellar histories on the issue of race. Anybody who says differently is either ignorant of history, or is deliberately twisting the truth in service of an ideological agenda. In most cases, the latter tends to be true.