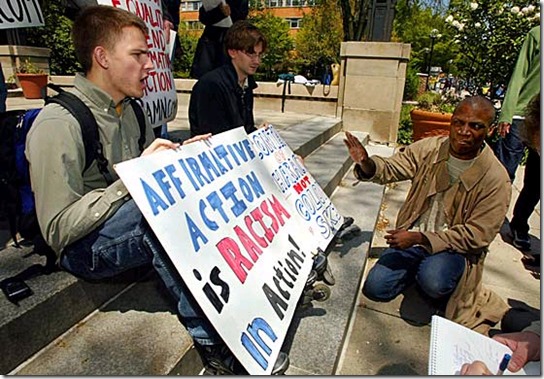 After the recent Supreme Court ruling that upheld the right of citizens in a state to ban race preferences in college admissions, there has been much legal discussion surrounding affirmative action. However, there hasn’t been enough discussion of the sociopolitical framing of the affirmative action debate. While affirmative action was a necessity in days of yore at the very height of institutionalized discrimination, the policy presently does significantly more harm than good for black Americans. Affirmative action has been a powerful mobilizing force for white supremacist groups. In the informative book of interviews with white nationalists called Contemporary Voices of White Nationalism in America, Reno Wolfe, leader of the hate group National Association for the Advancement of White People (NAAWP), points out that the NAAWP was formed primarily because of affirmative action for blacks. Additionally, affirmative action has become a talking point that is used to put a condescending question mark on all the achievements of blacks. This can be seen by looking at the treatment of President Obama. White supremacists ignore the inconvenient fact that Obama graduated magna cum laude from Harvard Law School; rather, they strenuously maintain that he was a beneficiary of affirmative action who did not deserve his spot in the first place. Another argument is that affirmative action leads to higher dropout rates due to academic mismatch, which would not occur if people are put in colleges and universities that best match their skills and test scores.

Opposing affirmative action is often incorrectly viewed as solely a conservative argument, but people who read widely and carefully understand that there are also non-ideological and liberal arguments for opposing affirmative action. After Thomas Sowell popularized the term ‘mismatch’ with respect to affirmative action admissions, the most recent and prominent proponents of the ‘mismatch’ argument are Richard Sander, a liberal economist and law professor, and Stuart Taylor, Jr.—also a liberal writer. More intriguingly, in her widely celebrated book on currently existing racial disparities in the criminal justice system called The New Jim Crow: Mass Incarceration in the Age of Colorblindness, liberal law professor Michelle Alexander argues against affirmative action as a policy. She writes:

Racial justice advocates should consider, with a degree of candor that has not yet been evident, whether affirmative action—as it has been framed and defended during the past thirty years—has functioned more like a racial bribe than a tool of racial justice.

Clearly, there are many creative and valid arguments that scholars of various ideological stripes have posited in opposition to affirmative action. It is simply wrongheaded to assume that the only arguments against affirmative action come from the right side of the American political divide.

For example, the problem of exceedingly wealthy whites buying their way into elite colleges has been thoroughly documented by Pulitzer Prize-winning journalist Daniel Golden in his book The Price of Admission: How America’s Ruling Class Buys Its Way into Elite Colleges—and Who Gets Left Outside the Gates. In it, he points out the ways in which young people who have no business in elite schools are accepted because their wealthy parents staple checks to their kids’ university applications. More interestingly, he points out how minorities are discriminated against by the awarding of phony athletic scholarships to wealthy whites for participating in uncompetitive pseudo-sports that require significantly less skill than real sports. He writes:

Colleges discriminate against minorities and low- and middle-income students by reserving slots—and, outside the Ivy League, scholarships—for athletes in sports only rich white people tend to play.

This is a much bigger problem than affirmative action, but nobody seems bothered because the sociopolitical framework that the affirmative action debate exists in defines it as a problem of undeserving black beneficiaries taking from hardworking, deserving whites. This is a risible fallacy to anyone even mildly acquainted with the facts about the copious set-asides and affirmative action benefits from which whites bountifully benefit. Society is rife with stories about unintelligent jocks who are admitted to universities solely because of their athletic prowess; however, at least those people have skills in real sports. As Golden points out, there are masses of talentless simpletons with rich daddies being admitted to elite universities solely because of phony scholarships earned for horseback riding and other upper crust pastimes preposterously labeled ‘sports.’ This isn’t considered problematic because it helps to preserve existing hierarchies that unfairly advantage rich whites and discriminate against ethnic minorities on the rise.

Another example of whites being privileged by affirmative action largesse is the impact of the New Deal leading to the creation of the American ghetto in the early 20th century. First, it is important to note that FDR was not very interested in black issues. As Burton Folsom, Jr. writes in his book New Deal or Raw Deal?: How FDR’s Economic Legacy Has Damaged America:

If Roosevelt wanted to pursue liberal ideas, why was he so unhelpful to black Americans on racial issues? Granted, some New Deal programs involved blacks, and did so against prevailing traditions of segregation. But FDR, liberal rhetoric notwithstanding, did little to advance civil rights. Why, for example, did he refuse to endorse the anti[-]lynching bills that were filibustered by southern Democrats in the Senate in 1937 and 1939? That would have been politically possible and politically desirable for someone determined to promote liberal ideas.

Given this information, it’s not surprising that key parts of FDR’s New Deal benefited whites and excluded blacks. The genesis of the American ghetto occurred precisely because whites were given loans to move out to the suburbs, loans which blacks were systematically denied in order to keep them in cities. In his paper titled The Formation of the U.S. Racialized Urban Ghetto, Professor Whitehead traces the “Racialized Urban Ghetto” (RUG) back to the National Housing Act of 1934, signed into law by President Roosevelt. The National Housing Act of 1934 created the Federal Housing Administration (FHA). He writes:

Th[e] distancing of RUG residents from not only suburban areas, but also from more affluent sections of the city, was a process that began as early as the 1930s, and was stimulated by federal policies that favored whites to the detriment of blacks. … These practices continued into the 1940s, as the FHA continue[d] to underwrite mortgages to prevent foreclosures that accrued while the country was still struggling to overcome the economic downturns of the Great Depression. … At the same time[,] however, these practices favored whites buying homes in the suburbs and discriminated against non-whites and residents of mixed urban communities.

Curiously, mainstream conservatives do not discuss the creation of the ghetto, even though it gives them a clear and justified opportunity to attack the injuriousness and injudiciousness of liberal urban policies. However, because it would also force them to be honest about the affirmative action for whites that was integral to the creation of the American ghetto and the many decades of problems experienced by blacks in the inner cities, they ignore the subject.

The primary reason why affirmative action for whites is meticulously scrubbed from the public conversation has fundamentally bigoted foundations. Whites are deemed worthy of the largesse they receive throughout society, whereas largesse given to blacks is deemed despicable. For example, the recent Cliven Bundy situation reveals this. Cliven Bundy, a man who thinks he is entitled to federal property without having to pay grazing fees does not recognize that he is a moocher. However, the same man had the unmitigated effrontery to talk about welfare-receiving blacks being useless, as well as pondering whether such welfare recipients would be better off as slaves. Bundy sees himself as deserving and entitled—even to things he is clearly not entitled to possess. However, because trying to get Bundy to comprehend and accept the humanity of blacks would be as difficult as trying to teach his cattle astrophysics, he obviously cannot compute why any black person should be helped with welfare rather than be considered slaves and the property of whites. Let us also not forget that he had massive amounts of support from both white conservatives—predictably—and black conservatives—who tried to defend Bundy in order to curry favor with racists on the right. One can attempt to write Bundy off as an unlettered rube who is unrepresentative of the broader American populous; however, his hypocrisy is remarkably consistent with the hypocrisy that the mainstream, white supremacist-friendly conservative movement insistently shows on issues regarding affirmative action. The inability to see white people as recipients of affirmative action in addition to the obsessive focus on black recipients of affirmative action is rooted in the racist inability to see blacks as human.

Mainstream conservatives ignore all the points raised above that show that whites have been—and continue to be—recipients of affirmative action in various areas of society. What the mainstream right focuses on is blacks who are given affirmative action. Most people who are part of the mainstream right do not even focus on the mismatch theory; these right-wingers simply regurgitate white nationalist talking points about how much whites have been victimized by undeserving blacks. As I said in my essay, The End of Artificial Black Conservatism, if serious black conservatives are going to oppose affirmative action, particularly in regard to college admissions, it cannot be for the flimsy, fraudulent, white supremacist-based reasons that the mainstream right routinely parrots. It has to be centered on the inefficaciousness of the policy, and its inadvertent harm of the very people it purports to aid.

Affirmative action is a serious issue. One can make the case that it was indeed a necessary policy step in order to combat legalized discrimination and a heavy social climate of prejudice that was a native part of American society. However, there are very valid arguments that need to be taken into account that, although it may have some benefits, its unintended consequence greatly outweigh those positives. Those arguments need to come from serious black conservatives. Affirmative action demonstrates one of many policy areas in which serious black conservatives cannot simply go along with the mainstream right if reaching out to black people is a goal. Regurgitating lies about the “white oppression” that affirmative action has caused has no relevance or use to black America. The only reason a black conservative would repeat such rhetoric is for applause from the white supremacist-friendly mainstream conservative movement.

Given the fact that the mainstream conservative movement is winning legally vis-à-vis affirmative action, I do not expect for there to be a serious change in the narrative that recognizes that whites enjoy more affirmative action benefits than the minorities on which they obsessively focus. That notwithstanding, it is still important for people to know the truth. The notion that black people are the biggest recipients of affirmative action is a complete falsehood. This is the kind of mendacity that can only be believed by operating from the racist premise that whites are inherently deserving of all largesse they receive, and blacks are bestial freeloaders who belong in chains and are deserving of nothing. Legal arguments aside, the sociopolitical framing of the affirmative action debate is profoundly revealing about race and racism in American society. Affirmative action represents one of many ways that some white mainstream conservatives who purport to be “colorblind” really mean that all they see is black—even when their own white privilege is before their very eyes.