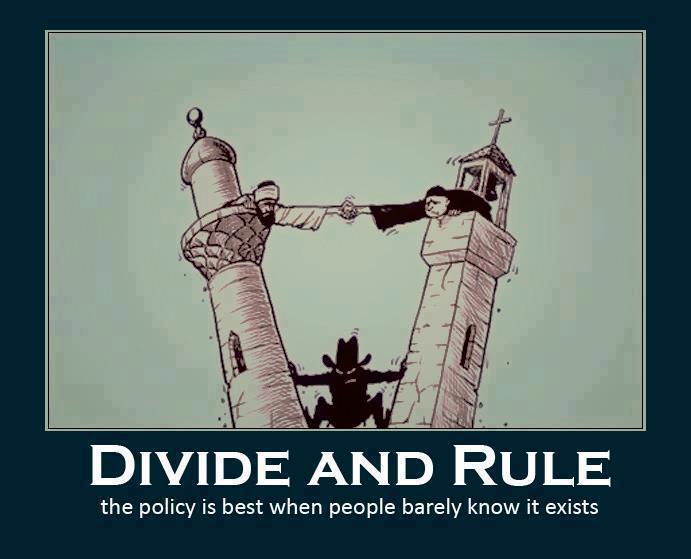 Aside from historical revisionism, the favorite tactic of white supremacists and white imperialists is divide and rule. Nothing makes white supremacists more eupeptic than pitting ethnic and racial groups against each other in order to effortlessly control them and maintain social power. In colonial Africa, divide and rule was the main stratagem that colonialists used to ensure that their interests remained unharmed. British imperialists divided Africa up in ways that made for efficacious colonies but would be next to impossible to function as autonomous states. The same is true about white supremacists and imperialists in India. The British deviously capitalized on the religious disputes between the Muslims and the Hindus in order to control the region. White supremacists, with rhythmic monotonousness, say that diversity does not work. They argue that it is harmful and destroys civilized societies. However, history demonstrates that one of the chief reasons why there are problems with diversity throughout the world is because of the unrelenting effort of white supremacists to strain intercultural relationships and exacerbate ethnic conflict.

As the black conservative law professor Carol Swain writes in her book The New White Nationalism in America: Its Challenge to Integration:

In an effort to expand their base, certain white nationalists have also broadened their list of issues and concerns to include an array of topics of interest to many mainstream social and religious conservatives. Loretta J. Ross, director for the Center for Democratic Renewal, reports that some white nationalists have combined traditional racist, white supremacist, and anti-Semitic beliefs with opposition to homosexuality, condemnation of abortion, support for family values, and a strong pro-American foreign policy.

If one compares the rhetoric of white supremacist sites and publications like VDARE and American Renaissance to commentary from supposedly mainstream conservative publications, the similarity in rhetoric is blindingly stark. The obvious similarity in the rhetoric of mainstream conservatives and the most virulent white supremacists is why Jason Richwine, an obvious white supremacist who wrote for Neo-Nazi websites was chosen as a Heritage Foundation anti-immigration scholar. Rarely do anti-illegal immigration folks in the chattering class talk about the importance of the rule of law and the impracticality and imprudence of having insecure borders in a Western country that has to cope with the volatility of Islamic terrorism. The bottom line of their concern is preserving whiteness in America and avoiding the “contamination” of people from the “Third World.”

Recently, the crisis on the southern border has become more acute. There are increased protests against illegal immigration. Many right-wing websites are enthusiastically highlighting black protesters who oppose illegal immigration. Many of these African Americans at the protests cite the black unemployment rate in America and point out that the country’s primary obligation should be to look after Americans who are natural born citizens of the country—not to look after people from other countries who are not citizens of the United States. There is certainly some validity to the concerns of these African Americans, who have been failed by both the Democratic and Republican parties. At a time of mass unemployment, the primary objective of the American government ought to be job creation for existing Americans—not immigration reform.

There are some black people telling illegal immigrants to go back to their countries. A black woman making such a comment was predictably praised by a conservative website as being an “intelligent black woman.” It is interesting that black people only become ‘intelligent’ to mainstream conservatives when advancing a specific agenda and fueling ethnic conflict that is beneficial to their cause. There was nothing in what the woman said that demonstrated intelligence. She was essentially just ranting against illegal immigrants. If the same black woman ranted about the scourge of racism, she would cease to be an intelligent black woman and would be called a moron who votes for Obama and wants free stuff. It is entirely possible that this woman is not even a conservative, but the kind of praise being heaped on her for being against illegal immigration is the kind of praise that black conservative lickspittles greatly crave.

Furthermore, people who promote the feud between illegal immigrants of Hispanic origin and African Americans are engaging in the promotion of intra-class warfare. Interestingly, class warfare is attacked as an inherently Marxist tactic in order to get poor people angry with the rich. What material difference, however, is there between people who try to foment jealousy among lower class people of different ethnicities (intra-class warfare) and people who rile the poor up and cause them to hate the rich (traditional class warfare)? Mainstream conservatives using the tactic of stoking the fears of lower class African Americans against illegal immigrants is no different to Marxists who use the fears of the poor to foment hatred against the rich. These conservatives would disingenuously retort that it is liberals doing the class warfare by encouraging illegal immigration—without honestly acknowledging their role in lionizing black people who inveigh against illegal immigrants. Simply arguing for open borders may be wrongheaded, but it is not promoting class warfare. There is nothing inherent in African Americans and Hispanics that makes living together an impossibility. The possibility of African American and Hispanic relations only becomes strained by people (on the right) insisting on making blacks believe that Hispanic economic progress means black decline.

There is almost no difference between the left and the right in American politics as far as political tactics are concerned. Alleged conservatives will in one breath denounce identity politics and class warfare, and in the very next breath endorse the nefarious use of identity politics and class warfare. Mainstream conservatives pose as being staunch moralists who are far above liberals and their approach to politics. Careful observation proves this to be utter bunkum. Pointing out Saul Alinsky and his direct or tangential connections to Democratic luminaries has become all the rage on the right. However, these mainstream conservatives do not see how they are using the same Alinsky tactics that they denounce when leftists use them. Creating fear, anxiety, and insecurity throughout society in order to achieve certain political ends is right out of the Alinsky playbook. This is precisely what conservatives are doing by demagogically presenting the rise of Hispanics in America as inescapably injurious to black America.

My point here is not to argue that black people should not voice their concerns on illegal immigration. There are definitely real concerns about which Americans of all stripes should be worried. My point is that black people need to be careful not to be used as pawns of white supremacists in order to create the necessary division they need to advance their ideology. It is nonsensical to believe that the white supremacists who engage in virulent anti-blackness as casually as they brush their teeth in the morning suddenly have the interest of black people at heart when it comes to illegal immigration. There are perfectly respectable reasons and ways to oppose illegal immigration without engaging in anti-Hispanic bigotry and fomenting ethnic hatred.

Ethnic conflict is not the answer to solving black economic woes. Practicing group economics is the answer. Black people cannot continue to sit on over $1 trillion of spending power while black unemployment is perennially double the national average. Black people need to stop putting hope in the Democratic Party, which has done nothing for black people despite blacks’ unyielding dedication to voting Democratic. Serious black conservatives must also stop thinking the Republican Party will ever care more about getting black votes than getting the votes of anti-black bigots like Phil Robertson, Cliven Bundy, and Anthony Cumia. Although policy is important, it is simply erroneous to think politics is the only way to catalyze social and economic change. Black people must create businesses, jobs, and economic opportunities for black people.

Focusing on illegal Hispanic immigrants is just a method to keep black people distracted from real solutions that can permanently change the situation of the black community. Regardless of whatever one thinks about illegal immigration, it is simply a white supremacist falsehood that the main concern of black people in America today ought to be Hispanic illegal immigrants coming into the country. White supremacists wish that they could keep black people distracted by fraudulently propping up Hispanic immigrants as perpetual enemies of African Americans. They wish that they could convince black people that economic and social achievement is a zero-sum game. This divide-and-rule strategy has been the modus operandi of white supremacy for centuries.