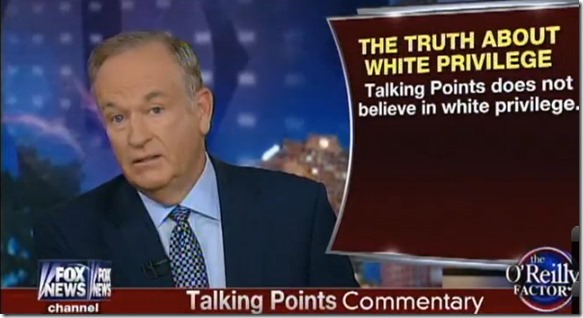 Bill O’Reilly recently did a segment on his show pointing out the fact that he does not believe in white privilege because Asian Americans educationally outperform both whites and blacks in America—and they adhere more rigidly to a traditional family structure. What Bill O’Reilly fails to understand, however, is that changing the topic from white privilege to an irrelevant discussion of Asian Americans’ successes does not refute the existence of white privilege. One cannot disprove the existence of white privilege by pointing out that other minority groups do well in America. All it shows is that, through hard work and determination, it is possible to overcome discrimination and reach the top. But that is not a statement that most people, except the most extreme left-wingers, contend against.

Before I go on, it is important to note that Bill O’Reilly is a provable white nationalist. His own words have exposed him as a white nationalist. As a result, one has to understand that anything he says about African Americans does not come from a place of genuine empathy and concern. The sole reason for his discussion of the problems in the black community is to promote his odoriferous brand of scathing anti-blackness. One must remember that the context of his recent discussion of African-American issues is to offer tacit support for the killer cop Darren Wilson and posthumously anathematize Michael Brown, the black 18-year-old Wilson shot dead. The notion that O’Reilly has the best thoughts and wishes for minority communities in America is risible. As I said in a previous piece:

In the American context, many cultural observers point out that if blacks in inner cities had the same group behaviors as other minority groups, such as Asian Americans, then their socio-economic standing would be significantly better. However, observations like these are rarely ever made by people serious about improving the livelihoods of black, inner-city residents. Rather, such comments are simply counterproductive, and they are intended to reinforce the construct of an inferior Negro race.

Liberals who act as though white privilege is an unconquerable obstacle to black success deserve to be criticized. Those who sell that narrative are simply profiting off the problems in the black community and are deeply unserious about finding solutions to those problems. White privilege is a fact of the Western world, and waiting for that privilege to miraculously evaporate before designing and advancing solutions for black progress is patently foolhardy. That is not the story of how blacks have historically progressed. However, conservatives who pretend as though concepts like ‘white privilege’ are invented out of thin air are just as heinous.

The constant nefarious use of Asian Americans as ethnic props to promote an insidious anti-black agenda is despicable. Defenders of white privilege have realized that the best way to argue with black people who address injustices and anti-blackness is to use members of another successful minority group as pawns for their agenda. Although Asian Americans experienced serious oppression by white supremacists in American history from the Chinese Exclusion Act of 1882 to the internment of Japanese Americans from 1942-1946, they did not experience hundreds of years of slavery, lynching, and Jim Crow in America. Bill O’Reilly knows this, so his comparison of the social status of the two groups is just to stir up envy and strife between African Americans and Asian Americans. This also goes back to the divide and rule mentality that I discussed in my previous essay on immigration. Ethnic minorities in America need to understand the various ways that those who enjoy certain privileges like to keep minorities fighting each other in order to maintain power.

Interestingly, people like Bill O’Reilly who trash African Americans never use African immigrants in America to make points about educational and social attainment. This is because such people would have to acknowledge that we know the experience of highly educated black people in America, and it is not just an abstract thought exercise. In his segment, O’Reilly pointed to educational attainment as a reason why black people are not high earners. This is not always true, as highly educated black immigrant groups do not always earn significantly more. As pointed out in the excellent book called The Triple Package: How Three Unlikely Traits Explain the Rise and Fall of Cultural Groups in America by Yale law professors Amy Chua and Jed Rubenfeld, Nigerian Americans academically outperform the national average and earn advanced degrees at rates higher than almost every other group in the population. Although there are many wealthy Nigerian Americans, this educational attainment does not always translate into high earnings. They write:

Given that Nigerian Americans obtain college and advanced degrees at one of the highest rates in the country, the fact that they only somewhat out-earn the national average is noteworthy. … For one thing, the Nigerian community includes a significant number of new arrivals and their children. Some of these new arrivals are very poor (pulling down overall incomes statistics) … But a larger factor may well be discrimination. African immigrants frequently testify to experiences of racial discrimination, and data repeatedly show that high-skilled immigrants from Africa end up in unskilled jobs far more than any other immigrants (except those from Latin America) and other Americans overall.

This belies the claim that all black people need to do is focus on education and everything will be fine. There are several structural obstacles to black progression that master’s degrees and doctorates do not instantly cure. Although America is a land of immense opportunity, it is infuriatingly insulting when people suggest that African immigrants come to America and have opportunities delivered on silver platters. Success as a black immigrant in America takes an unspeakable amount of work. It is indeed a privilege that whites do not experience such toiling through discrimination. For example, the name ‘Chidike Okeem’ is much more likely to get my resume summarily rumpled and tossed in the trash than it is to generate enthusiasm in a potential employer. The same would not be true for someone named ‘Chris Oakley’ with the same skills and qualifications. In America, someone with a name like mine can put out thousands of resumes for pay-appropriate jobs and not get a single call back. (Yes, I am speaking from experience—and studies support this.) The notion that employers are falling over themselves to hire qualified black applicants in pay-appropriate jobs goes beyond mendacity. It is a cruel inversion of reality. Despite educational attainment and skills, black people are still discriminated against. It is indubitably true that education helps in the long run, but the notion it is a panacea that instantaneously removes all economic barriers for blacks in America is provably erroneous.

O’Reilly’s denial of the existence of white privilege in America is not only historically illiterate, but it is the apotheosis of racial self-deception. O’Reilly strikes me as someone who reads short articles that confirm his viewpoints and does not bother to read books that explicate viewpoints that he does not hold. It is obvious that O’Reilly has never bothered to read When Affirmative Action Was White by Columbia University professor Ira Katznelson—or any other books like it. One cannot argue with people who willfully delude themselves into believing that there is no such thing as white privilege in America. When people start off from that ludicrous premise, it becomes painfully manifest that they are not interested in having meaningful conversations about race in America; they are simply interested in engaging in the ever-profitable pastime of bashing blacks.